For decades, the Arab-Israeli conflict was used as a scapegoat by Arab regimes, to distract from the Arab world’s self-inflicted domestic societal issues - It seems it no longer works.

The memory of the Shoah cries out to the present generation not to take its military and political abilities for granted – and to be willing to use those abilities against those who wish for the Jewish people to be destroyed. As long as Israel’s enemies are allowed to whitewash 3000 years of continuous Jewish national history in Israel and Jerusalem, genuine peace between Israel and her neighbors will remain a pipe dream. "Politics is the art of the possible" Bismarck used to say. 150 years later, the image of Israel today as a major power, seems to be a direct consequence of a similar policy of its leader, Benjamin Netanyahu.

Twenty-five years after the Oslo Accords and a few days before Israeli elections- it is time our leaders learn from History. The end of the conflict will come only after we achieve a clear Israeli victory. President Trump’s recognition of Israel’s Golan Heights advances Israel’s victory and is the beginning of the end of free lunches for the defeated Arab aggressors.

Over the years, significant international pressure on Israel created an anomaly where ironically, the more Israel seeks peace and compromise with its unreformed enemy, the further peace is pushed into a distant future. With all the financial, political and emotional capital already invested in the cause of ‘Palestine’, it is vital to keep up a certain ‘narrative’ with which facts must never be allowed to interfere. The UNHRC condemns Israeli defense against armed terrorists who vow to “tear out the hearts” of Israelis and “erase” the border with Israel, but remains silent about the Hamas aggression. Europe for decades associated the US with “ruthless Capitalism”, yet criticizes the Trump administration for prioritizing security over profits, cynically preferring business with the Ayatollahs over the well-being of the Iranian people. As long as Ramallah and Gaza prioritize Israel’s destruction over the well being of their populations, the two-state plan will remain an unattainable pipe dream. Israel has been reluctant to use massive force against terrorist enemies hiding in civilian urban areas like Gaza and it increasingly focuses more on fighting anti-Israel propaganda than defeating its adversaries in the battle field. Sanctions against Iran have not rallied the Iranian people around their regime as critics have warned. Iranians are blaming their own regime for the harsh oppression and deteriorating living conditions. 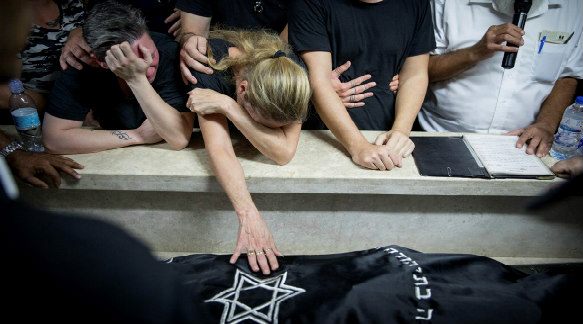 We wait for our leadership to stand as proud Jews against our enemies. With strength of conviction and a desire to be victorious. Even with the recent atrocities, the world will continue throwing money at the murderous Palestinian Authority and demand that Israel reward them with a state of their own.

The Israeli government would never tolerate a nonchalant, less than maximum deterrence approach by other governments to Jewish communities the world over. Citizens of Israel should expect the same from our government here.
Israeli tolerance made it possible for an Arab terrorist to murder Ari Fuld. The Arab murderer even stopped and ordered falafel at a local Israeli stand frequented by both Arabs and Jews before his attack. Jews who enter Arab villages are lynched.