Egypt was left isolated and its president lost his life for thawing relations with Israel. The Saudis are in no hurry to normalize relations

In Jordanian cartoonist Emad Hajjaj’s political cartoon entitled “Secret Normalization” we see Benjamin Netanyahu, the Prime Minister of Israel with a Star of David on his arm. Under the table lay a character with the words “Arab States” written on it. On the covered table rest medals labeled “Oslo” and “Camp David”, the last deals that were signed “above the table”. The medals are covered in cobwebs 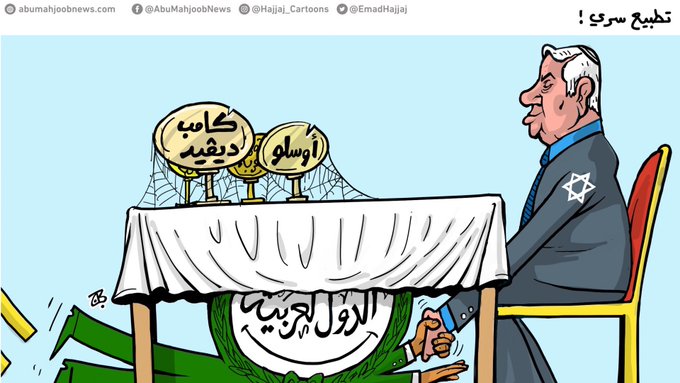 Our Sages say “Blessings are only found in places hidden from the eye (Tractate Ta’anit 8b).” However, many Israelis still want relations between Israel and the group known as “moderate Arab states” be held on the table and no longer under the table . An example of a state that did this and has been paying the price since is Egypt.

For most of the 20th century, Egypt was thought of as the big brother of the Arab world. They reached the height of their influence from 1954-1970, the days of Gamal Abdel Nasser. Nasser was not satisfied with being the president of Egypt. He united with Syria for three years, intervened militarily in Yemen’s civil war in the ‘60s and essentially ran the Arab world as a whole. Through all this, one matter was always the most important to him; the struggle against the Zionist entity known as Israel.

Egypt stood at the head of the struggle against Israel and pushed for the establishment of the Palestinian Liberation Organization (PLO) in 1964 that would eventually become the Palestinian Authority. After the “Naksa” (literally, “The Setback”), the Arab loss during the Six Day War of 1967, the idea of a united secular Arab entity began to fade as did the status of Nasser who died in 1970.

Anwar al-Sadat, Nasser’s replacement, was thought of in the beginning, as a weak and temporary leader. However, as history taught us, he had a number of important and unexpected achievements. The ends and means of his strategy were the same, the restoration of Arab dignity. His first step was the Yom Kippur War which curbed Israel’s sense of superiority and pride after the Six Day War. The second step, which stemmed from the first, was the diplomatic process with Israel that led to the peace deal. From Sadat’s point of view, the diplomatic process returned the Sinai Peninsula to Egypt and even more importantly, allowed for the reopening of the Suez Canal, an important economic achievement as well as one for Egypt’s national pride.

The response of the Arab world to Egypt’s deal with Israel was decisive. Egypt, once leader of and host to the Arab League, was kicked out of said League. Sadat was subject to harsh condemnations and many Arab countries boycotted Egypt and cut off diplomatic ties.

Sadat himself paid the ultimate price for his policies. Despite the fact that there was no direct connection between the murder of Sadat and the agreement with Israel, he was killed by the “Gama’ah El Islamiyah” (Islamic Group) in October of 1981 during the October War anniversary celebrations (known to us as the Yom Kippur War). Egypt returned to the embrace of the Arab world only following the drama of the Kuwait crisis, then President of Iraq Saddam Hussein’s invasion of neighboring Kuwait in 1990, but Egypt never returned to its senior position.

Last Shabbat, Ariel Kahana of “Makor Reshon” compared the alleged visit in Israel of the Saudi Crowned Prince MBS (the nickname of Prince Mohammad Bin Salman) to that of Sadat. Without a doubt, Bin Salman is the strongest man in Saudi Arabia and may soon wear the crown. The comparison is fascinating and impossible to ignore. Despite that, it is important to remember that the situations are completely different, both due to the slow pace of change and the level of publicity regarding the relations between the two countries.

Despite the increasing closeness between Israel and Saudi Arabia, we must not forget that the Saudi Arabian Kingdom is a fundamentalist Sunni state run by the most extreme school of thought in Islam. It is estimated that the Saudis have invested around 100 billion dollars in the promotion of its doctrine throughout the world. A simple example of Saudi position was the 9/11 attacks as most of the hijackers held Saudi citizenship.

Despite this, one of the oldest allies of the Kingdom is none other than the United States. Cooperation between the countries began all the way back in the 1930’s during the presidency of Franklin D. Roosevelt with the discovery of oil in the gulf. One of the reasons for their cooperation was opposition to the communism of the USSR. Over the years, the allegiance was upgraded and is now expressed through a large number of weapons deals. The alliance stood the test of the Gulf War in 1991 when the United States responded immediately in the defense of the Gulf States to the acts of Saddam and in defense of the Saudis who hosted the western coalition force.

After a disheartening eight years of Obama that culminated in the signing of a nuclear deal with Iran and the rejection of both Israeli and Saudi concerns, Israel and Saudi Arabia continue to improve relations between each other and with Donald Trump, the new American president. Incredibly, Trump spoke just this week about the possibility of cancelling the deal with Iran.

It is recommended to those who have already popped their Champagne bottles (which is illegal in Saudi Arabia of course) to celebrate the thawing of relations to return the cork to its place. The Saudi prince is not yet a card carrying member of the World Zionist Organization, he is merely considering the best interests of Saudi Arabia. The main reason for cooperation between the countries was and is their common enemy, the Shi’a crescent led by Iran. Saudi Arabia and Israel are keeping an eye open on what is happening in Syria in particular but also in Iraq. Iran and Hizballah are on Israel’s border and show no intention of returning to Tehran and Beirut after Syria restabilizes.

The biggest advantage to relations remaining under the table is economic and diplomatic cooperation without consequences from the Arab world. This would preserve the status of Saudi Arabia as the leader of the Sunni camp and allow for great maneuverability for both countries. One can imagine what might happen in the next crisis if Saudi Arabia were to decide to recall their new ambassador?